A friend of mine recently posted a saying to FaceBook stating, “If I were meant to be controlled, I would come with a remote.” At first glance I laughed along with it and then the analytical brain kicked in and wanted to create a bigger picture behind the quote. 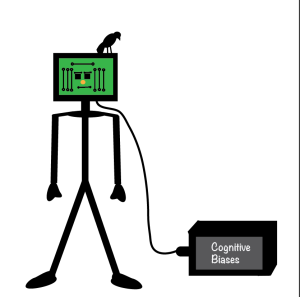 I hate to break this to you, but humans do come with a built-in remote control. It is called cognitive and social biases. These biases cause humans to make connections to things that really may have no relation to each other and to frame what goes on in life to support what we want to see as our reality. Once one understands how these biases work, human behavior becomes quite predictable.

In my opinion, these biases form the foundation of mass consciousness and also hold the key to unlocking the human’s ability to move beyond the ingrained need to see life as us and them and good and bad, which is based on the primary need to be right. Once one understands how the cognitive and social biases work, it empowers the human to not be as easily manipulated by external forces.

I recently watched a couple of on-line marketing seminars. Both venues followed the same pattern. The facilitator welcomed everyone and then told each of us how smart and unique we were for deciding to sit through an hour-long presentation.

That statement is debatable, but the technique was designed to appeal to the brain’s bias where  people want to see the choices they make as benefitting them. It is also geared to instill a sense that the group coming together to learn a proven technique is special because they are more intelligent than the average person, thus giving the group experience a preferential tone. In these two cases, the brain’s tendency to perceive things in certain ways was used to hook people into wanting to sit through the presentation.

Beside learning how to avoid being easily manipulated by society, understanding how brain biases work allows us to interact with more compassion in life. Moving beyond the biases simply allows people to step back from traditions that tend to separate each other and to see that we really do have more in common with each other than what we may have allowed ourselves to see. It also shows us how often we can easily make erroneous assumptions about life and each other, and can learn to remedy those beliefs as well.

When presented with these keys to greater cognitive freedom, it brings up an even deeper question. In my experience, most people are comfortable with how they frame their world and don’t really want to step outside of their comfort zone–yet again another brain bias. How willing are people to to give up their old ways of perceiving life in order to see humanity as more connected? It’s a good question to ask and one that I wish would be asked more frequently.